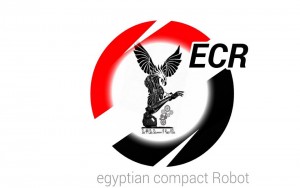 Egyptian compact Robot (ECR) is a multi-task robot used in many applications. In this project, it is focused especially on military applications. It is used in bombs discovery and investigations of any foreign bodies. Also, it has full capacity to deal with most types of crackers with high accuracy. It may be considered as the right arm of the human that depend on it in dangerous situations. The system used “arduino” to control the operating system of the robot. It sends/receives commands to/from the console. This will be an alternative in the control system in the events of a malfunction or a Failure. ECR robot also contains more than one camera that doing vivid pictures of the considered site. They are sent to the remote control screens. This increases safety and reduces the rate of casualties. The robot arm is one of the most special characteristics of the robot that it has a high accuracy and has many advantages.