Water is one of the most abundant resources on earth, covering three-fourths of the planet’s surface. However, about 97% of the earth’s water is salt water in the oceans, and a tiny 3% is fresh water. This small percentage of the earth’s water—which supplies most of human and animal needs—exists in ground water, lakes and rivers. The only nearly inexhaustible sources of water are the oceans, which, however, are of high salinity. It would be feasible to address the water-shortage problem with seawater desalination; however, the separation of salts from seawater requires large amounts of energy which, when produced from fossil fuels, can cause harm to the environment. Therefore, there is a need to employ environmentally-friendly energy sources in order to desalinate seawater [12].
Egypt possesses a high potential of brackish groundwater available from different aquifers, and seawater from the Mediterranean Sea border its northern coast and the Red Sea border its eastern coast. All Arab countries lie in the best sun-belt region in the world and Egypt has the highest number of sun hours all year round. Solar energy for groundwater and seawater desalination is an independent infinite energy resource; it has low running costs and reduces the contribution of greenhouse gases (GHG) to global warming. Perfect meteorological conditions and land space are available in remote areas, where solar desalination could supply freshwater for drinking, industry, and for greenhouse agriculture.
In the present project, solar energy is used as the energy source and solar still type desalination system assisted with evacuated tubes and parabolic trough solar collector is used for obtaining drinking water by a recommended design, defined in detail in the report.
A prototype for solar still type desalination system assisted with evacuated tubes and parabolic trough solar collector is executed. The effect of environmental parameters (solar radiation, air temperature, and wind speed) on the amount of obtained desalinated water will be studied. 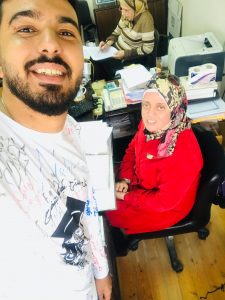