The research examines a solar power generation system that allows a solar collector and a solar chimney to create a solar induced air flow that drives a turbine to generate electricity. SCPPs (solar chimney power plants) are a viable technique for generating renewable energy. SCPPs are suited for large-scale solar energy harvesting. They run efficiently without the usage of auxiliary energy and do not pollute the environment. A mathematical model for the experimental setup of a tiny chimney power plant is presented in this paper. The prototype plant, which occupies about 16-meter square, that has a metrological site (31°18’43.0″N 30°04’00.4″E) The system was built to examine the solar chimney turbine’s performance and power generating characteristics during the summer season. This research is aimed at Air velocity, electric power generation, Mass flow rate, Mass flow rate and plant efficiency. The solar chimney’s functional principle is first described. Some of the results of the thermodynamic study are shown, as well as a model for a solar collector. Because of the lack of solar intensity duo to location, small surface area of collector and smaller chimney, the average power production fluctuates from .001 to .011 watts, which is relatively low. The experiment was conducted in the summer of July 2021 from the experimental setup of a small chimney plant. 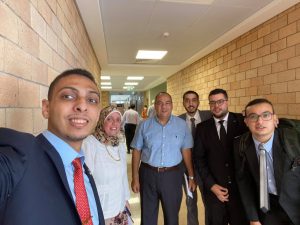